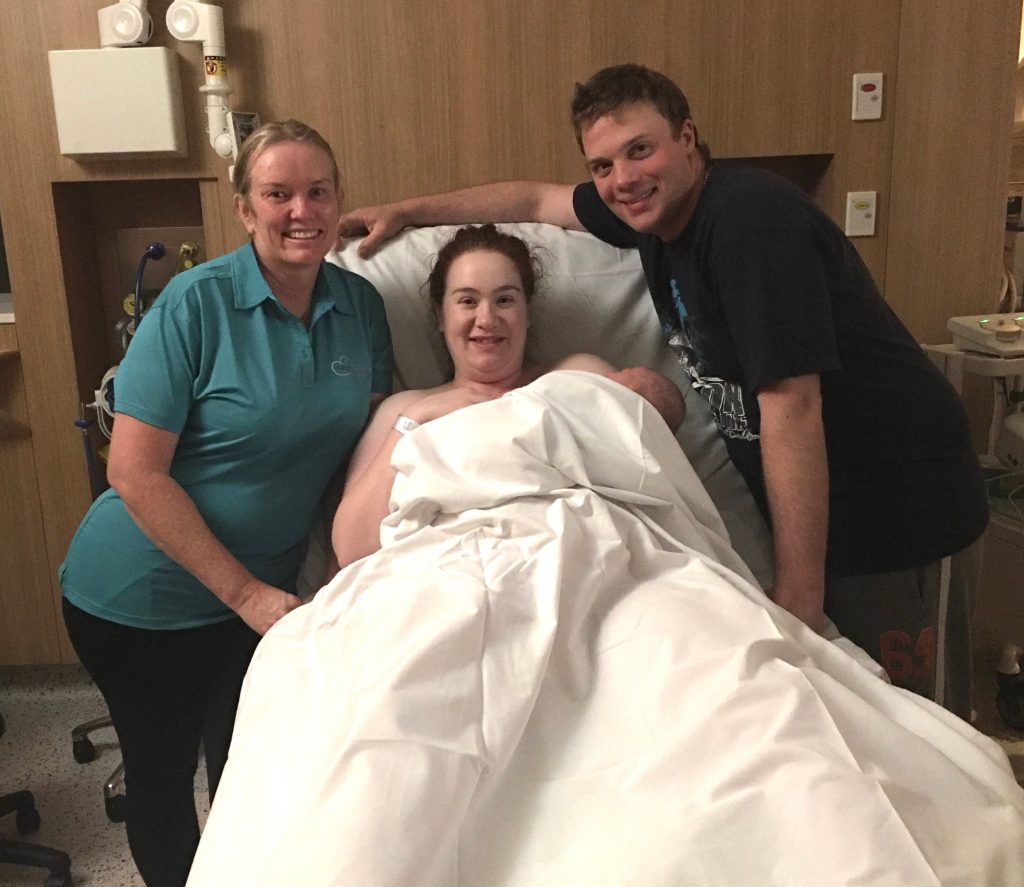 I like to be prepared, so when Morgan and I started planning a baby I Googled pregnancy and birth and soaked up everything I could find.

One of the things I found was Doulas.  Here in Australia they’re not a big thing.  But I think the hospitals should mention them from the get-go.  Being pregnant, and giving birth is so tough, and people just aren’t getting the support they need.

In my Googling I came across Angela Gallo on Instagram.  The way she talks about birth and empowerment really resonated.  I wanted to find a Doula that had trained with her, and that’s how I found Alison.  At the time I didn’t even know about Postpartum doulas.

Talking to Alison, she reminded me of a really motherly figure.  Even though I had the support of my mum, sister and Morgan, it was good to have someone emotionally removed.  She was invested but not attached.

I think that women need someone to chat to and have someone to give you unbiased information and advice.  Having Alison was like having a best friend whose sole job it is to support you.  She was also great at giving Morgan the support he needed.  We were more confident because we felt educated and supported.  She is so well educated, calm and supportive.

Alison touched base with us throughout the pregnancy.  In the later stages she gave us lots of videos, exercises and a wealth of information.

I started having faint contractions at around 2am.  I was calm because of everything Alison had taught me.  I had a scheduled appointment with the midwife at 10am, and she confirmed I was in labour.  Over the course of the day, Alison checked in regularly to make sure I was eating, drinking and resting.  She also checked in with Morgan to make sure he was OK, and helped him stay calm.  She reminded us to try and keep labouring at home as contractions were sill too far apart.

At around 5pm the contractions increased and by 6pm they were pretty intense.  The hospital told me to take 2 paracetamol, and Alison suggested a hot bath or shower.  I thought I still had hours to go.

At 8pm my waters broke.  Morgan started to stress, but Alison calmed him down, which helped me too.  By 9pm Alison was headed to our place, but Morgan called her to ask her to meet us at the hospital – things had really started to speed up.  Alison arrived with a bag full of amazing stuff, like cold Hydralyte and a fan.  I didn’t want to be touched – I was in the zone, but Alison made sure my family had her Blissballs to snack on.  Almost straight away they took me to a birthing room, and 45 minutes later my baby was born.  It was a fast birth but Alison made sure we were all OK before leaving us to be a new family together.

What was great was that Alison supported Morgan and I all day.  I didn’t know how tough the pain would be, but we felt like we weren’t alone.  Alison was always there for us.

I had imagined breast feeding would be easy.  That my baby would latch on and I would end up with a freezer full of milk, but it didn’t work out that way.

I spent two days in hospital before I went home.  I felt like my baby wasn’t getting enough milk, that there was something wrong, but the midwives at the hospital said that he was latching on great, and either he was lazy or I didn’t have enough milk.

When the midwife came to the house for the first checkup, my baby had lost weight.  He was fussy and pulling off the breast.  When she came back the next day to check on us, he had lost more weight.  The midwife suggested formula top-up and said if he had lost weight again the next day we would have to go back to hospital.  I broke down crying.  It felt like my fault, like I had somehow stuffed up.  Alison was fantastic – a shoulder to cry on.  Her gut instincts told her something was not right and formula was not the solution.

Of course, when the midwife came back the next day he had put on weight because of the formula, so the midwife said that we wouldn’t need to go back to the hospital.  She was really dismissive.  She actually said to me ‘I don’t mean to insult you but you have hypoplasic breasts[i]…’  and I should use formula.

Alison was great.  I was getting pretty depressed and Morgan was worried but she supported us both just like she had during the pregnancy and birth.  She suggested a specialist Lactation Consultant, and it was such a relief.

The Lactation Consultant straight away picked up that my baby was tongue-tied in three places – the upper lip, cheek and tongue.  Nobody in the hospital or the home visit midwife had even looked in his mouth.  They had just been boastful about their knowledge.

The Lactation Consultant was disheartened that I had been told to put my baby on formula.  Tongue tied babies need to work out how to suck on their own and introducing the bottle had interfered with that.  The advice of the midwives carries weight, and they hadn’t looked at all the possibilities.  If I hadn’t been for Alison, I would have believed the midwife, and I might never have found out about my baby being tongue tied.

The Lactation Consultant referred us to a specialist to release the ties, and he in turn recommended a chiropractor for before and after.  My baby’s mouth was pretty sore afterwards, but healed up in about a week.

After that, he began to latch on better but because of the introduction of the bottle he wasn’t sucking from the back of his mouth, so he was feeding at about 80% bottle, 20% breast.  That was really tough to come to terms with, but Alison helped us focus on the positives, and see that this wasn’t the end of the world.

My milk supply dropped dramatically, but Alison brought me lots of lactation-stimulating foods and my milk went from around 50ml a day to 200-300ml a day, which really helped my frame of mind.  Luckily, Alison had suggested at the beginning that I express colostrum, which I would not have known to do, so I was able to use that.

My baby is now a healthy, happy and in the normal weight range, thanks to Alison and the Lactation Consultant.

Honestly, having Alison as our Doula was the best thing we ever did.  I don’t know how we would have got through without her.  If you don’t have the right support, the hospital system can chew you up and spit you out.  But Alison gives you the emotional and physical support you need – not to mention the knowledge and the toolkit of amazing people she has on hand to help you.  She is truly worth her weight in gold!

7 Things Dads Need to do to Prepare for Childbirth

The Difference a Doula Makes